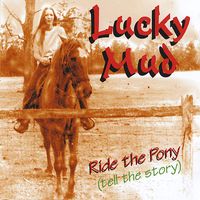 From the recording Ride the Pony (tell the story)

This is a true story about my great, great, great uncle, Buck Stone, from Port St. Joe, Florida back in the 1850's. Northwest Florida was the wild west and we had our share of "cracker cowboys", shoot-outs and characters.

Buck Stone shot Whaley in the middle of the chest
Laid him out in the streets of old St. Joe
He went up to his brother, who was the high sheriff
Said brother, I know I've got to go
I'm goin' to Texas
I'm goin to Texas

He saddled up his horse and he headed to the west
Half the town was ridin' by his side
When he got to Mobile
He told them all goodbye
Said, when I get to Texas I'll send for my wife
I'm goin' to Texas I
'm goin' to Texas
Chorus:

There's a thousand miles of wilderness between Buck and his home
In the land where gators crawl and panthers cry
He settled down in Texas
He sent for his wife
But in giving birth to their child, she had died
Not goin' to Texas
Not goin' to Texas
Chorus: repeat last line 3 times